Some further publicity on the push to save what's left of Sunshine Coast wetlands:


A SUNSHINE Coast conservationist has called on the council to help save one of the last remaining parcels of wetlands along the Maroochy River.
Avid bird watcher and wild
life habitat crusader Greg Roberts says the 12ha site is home to several rare and threatened species of birds but council last year decided against the purchase which would protect it from development.
Council officers who reviewed the property said it was not suitable because the former sugar cane farmland was "not natural" and had been "human-modified".
Landowners Lisa and Geoff Warren want to separate the 4ha of riverfront land with their home on it from the other side of River Rd.
Mrs Warren said that once they had discovered the presence of rare and threatened bird species on the wetlands, they had offered the council the chance in November last year to buy it for conservation purposes.
"We would love to preserve it," she said.
"There has been a little bit of development around us and all these really rare birds lost everything.
"We hope the council or somebody will come out that can save it as a wildlife sanctuary so everybody can enjoy it."
On his many bird-watching visits to the site, Mr Roberts has recorded the presence of scarce or elusive birds such as the eastern grass owl, lewin's rail, spotless crake, brolga, king quail and red-backed buttonquail.
Mr Roberts has launched a campaign on his website and Facebook page urging people to contact the council to encourage them to secure the rare parcel of land.
"The council's previous decision was well-meaning, but it's unfortunate as these former farmlands provide excellent habitat for a range of species which have been largely eliminated from the region by the destruction of wallum heath and wetlands for residential development," he said.
"They need to look beyond their definition of what is worthy of conservation.
"That they are not natural should be no barrier.'' 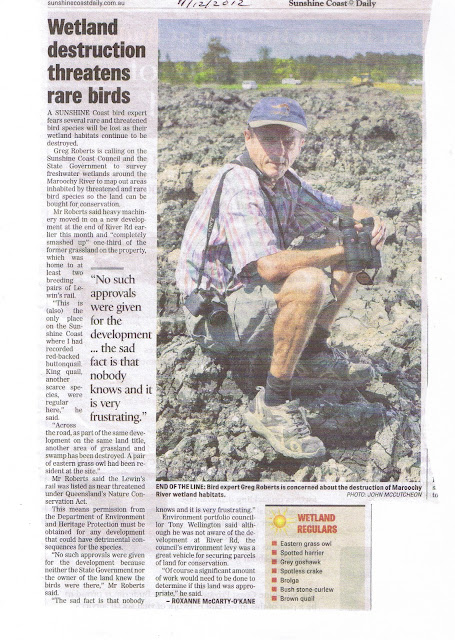