Wetlands Destruction on the Sunshine Coast 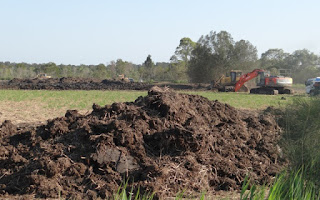 Current and planned developments threaten what little remains of freshwater wetlands on the Sunshine Coast. The images here were taken yesterday at the end of River Road, Maroochy River. The land being bulldozed above was until this week an excellent area of grassland and swamp. I have had a breeding population of at least two pairs of Lewin's Rail for the past couple of years at this spot. This is the only place on the Sunshine Coast where I had recorded Red-backed Buttonquail, and King Quail, another scarce species, were regular here. 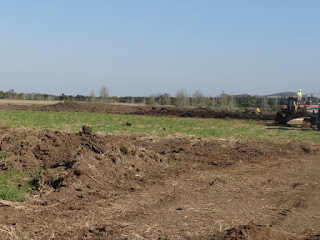 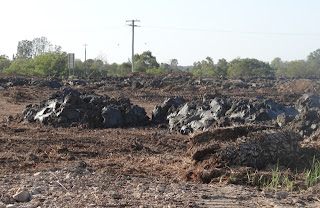 Across the road, as part of the same development on the same land title, another area of grassland and swamp has been destroyed. A pair of Eastern Grass Owl had been resident at the site in the image above.
The land was sold recently to someone who wanted to "build a shed on it", said Nambour real estate agent Gary Blake. The new owner had "cleaned up the place, it was a real mess", he added. It's interesting how varied the perception of what constitutes a mess can be.


Lewin's Rail is listed as Near Threatened under Queensland's Nature Conservation Act. Permission for development that could have detrimental consequences for the species is supposed to be obtained by the state Department of Environment and Heritage Protection.  No such approvals were given for the development in the images above. 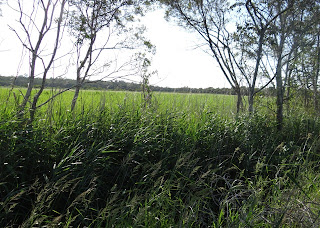 This land is a former sugar cane farm so the swamps and grassland are not natural. However, given the almost total destruction of natural wetlands on the Sunshine Coast, they provide crucial habitat for many waterbirds and other birds and mammals. Government authorities should consider buying some of the properties and managing them as wetland habitat; the image above shows what this habitat looks like.

The flats around both sides of the Maroochy River constitute one of the best sites in Queensland for the rare Eastern Grass Owl. Other raptors frequenting them include good numbers of Spotted Harrier and Grey Goshawk, both regarded as uncommon.


Good numbers of Spotless Crake and Buff-banded Rail are among the waterbirds that live in the grasslands and swamps. Other birds here include Brolga, Bush Stone-Curlew, Tawny Grassbird and Brown Quail.