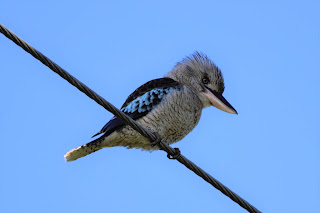 A Blue-winged Kookaburra has turned up at Yandina Creek on the Sunshine Coast. I was alerted to the bird yesterday by Jonathan Westacott, who told me that his wife Marguerite saw what she thought was a Blue-winged Kookaburra as she drove along the Yandina-Coolum Road on Saturday afternoon. I found the bird late yesterday but had only poor, distant views as it caught and swallowed a small rat. I managed a single image before crows chased it off. That photograph (below) is classically indeterminate. 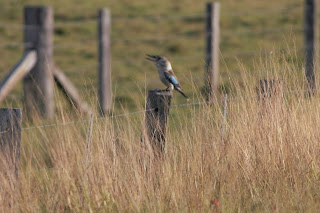 The bird has a Laughing-like head shape with evidently a Laughing-like dark eye, and no sign of a Blue-winged's blue rump. But it has what looked like a large Blue-winged type bill, and the blue colouration on the wing was Blue-winged like; there was also no sign of the Laughing's facial stripe. I put the image up on BirdLife North Queensland last night and opinion was divided, but the possibility of a hybrid was discussed. 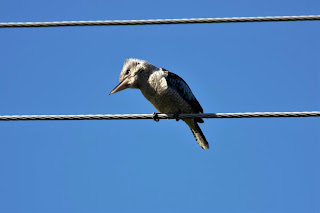 I returned to the area this morning and had good views of what clearly was an adult male Blue-winged Kookaburra. Which just goes to illustrate the vagaries of photographs. It was in the same spot as yesterday, and presumably where Marguerite saw it on Saturday: along the Yandina-Coolum Road, about 400m east of the River Road turnoff. It perches on the wires on the southern side of the road in that area. It's quite jittery so if people want to observe or photograph the bird, it's much better to park opposite the wires on the northern side of the road (ie, on the left heading from Yandina towards Coolum). The site adjoins paddocks used to graze cattle and sugar cane plantations. It's close to the recently completed solar farm and Yandina Creek Wetland, and just a few hundred metres from where a Common Bronzewing unexpectedly turned up last year for a few weeks. 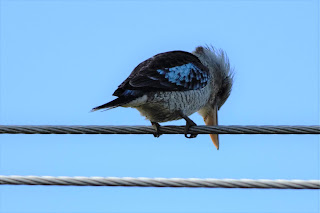 Blue-winged Kookaburra is a very rare bird in south-east Queensland, found sparingly in pockets of tall eucalypt woodland in the Brisbane and Lockyer valleys. There are a handful of ebird reports from the Sunshine Coast region but to my knowledge, this is the first record to be confirmed by a photograph or subsequent observations. Ebird. 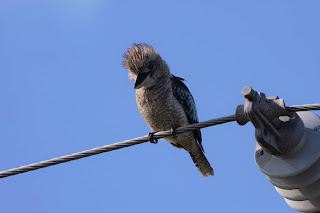 Imbil State Forest, with its mosaic of open forest, Auracaria pine plantation and lowland rainforest (vine scrub) is always worth a look. I surveyed for owls along 6km of Derrier Road and side tracks heading south from Stirlings Crossing. A Platypus obliged by showing in the late afternoon at Stirlings Crossing.

I was looking for Masked, Power and Barking owls. No joy with the latter two but it was an exceptional time for Masked Owl, with four birds seen and photographed within an hour. The first was a female showing well enough in open forest before it flew to join its mate at the edge of an adjoining pine plantation.

About 1km further on, another pair of Masked Owls were calling (not in response to playback) on what was a still, moonlit night. These birds were in a quite open area of woodland and again showed nicely. Eventually they flew into some nearby vine scrub. The differences between the females and males of both pairs were noticeable, with the first male having particularly pale underparts. In both pairs, the smaller males lacked the buffy colouration visible on the females' underparts.

Other birds in the state forest included Rose Robin, Azure Kingfisher, Variegated Fairywren and quite a few Russet-tailed Thrush.


After visiting Borumba Dam I headed back to Imbil. One km south of town on the Brooloo Road, a Black Falcon was circling over the road. By the time I got the camera together it was moving away so I managed just a distant shot. It's my first Black Falcon for the Sunshine Coast area (and one I missed during the 2018 Big Year).

A bit further on, on the northern outskirts of Brooloo, I found an unexpected colony of Fuscous Honeyeater. This species is rare in the Sunshine Coast region; the only other area where I know it to occur is Yabba Road near Jimna.

I called into a farm dam near Gheerulla on the Moy Pocket Road. Here were 6 Pink-eared Ducks, another species that's rare in the region. I first found the ducks on the dam a few weeks ago.

Posted by Greg Roberts at 09:44 No comments: