After leaving the mining town of Newman (see last post) we travelled south and out of the Pilbara. We were moving into the vast mulga of central Western Australia, extending on this trip from south of Newman to beyond Yalgoo.

The first bird of interest was a male (recently split) Western Quail-Thrush by the road 50km north of Kumarina Roadhouse. I watched it briefly before the bird disappeared in gusty wind conditions; I was not to see the species again, despite trying several known sites.

Then, south of the roadhouse, we encountered a nice group of Ground Cuckoo-shrikes by the road.

We ended up camping in the bush by Nallan Lake, a beautiful spot 20km north of Cue, where we had our first camp fire of the trip. We also had our first Australian Shelducks of the trip, while Crested Bellbirds and Mulga Parrots were present.

The next morning we checked out the road between Nallan Lake and Mount Magnet, stopping frequently at nice-looking spots. It was apparent there had been good rains recently as wildflowers in various shapes and forms were everywhere, looking fabulous.

At Lake Austin, 22km south of Cue, we had our first Peregrine Falcon of the trip. A couple of pairs of Black Honeyeaters were seeing flying into the distance, as was a party of 3 Orange Chats; I have been surprised at how flighty the birds are out here. Other birds in the mulga included Hooded Robin; White-browed and Grey-crowned Babblers;  and a White-fronted Honeyeater, also somewhat distant.

At The Granites, an attractive spot 7km south of Mount Magnet, we had a party of about 10 Pied Honeyeaters.

In the mulga 10km south-west of Mount Magnet on the Geraldton road, no luck in finding Western Quail-Thrush at a spot supposedly good for them, but Chesnut-rumped Thornbills were nice.

We stopped for the night in the caravan park in the township of Yalgoo. Nearby were more Pied Honeyeaters and a few Crimson Chats.

The next morning I checked out the mulga, with flowering shrubs in abundance, a short distance to the west of Yalgoo. White-fronted Honeyeater and Pied Honeyeater were very common. Both species were also found later further along the highway towards Geraldton.

After leaving the delightful Karijini National Park (see last post) we moved on to the bustling Pilbara town of Newman. Like the rest of the Pilbara we have travelled through, this place is alive with an abundance of personnel, vehicles and equipment from the mining industry.


We stayed in the Newman Caravan Park on the southern edge of town. This is the site that has been reliable for the past decade or so for the Pilbara Grasswren, split recently from the Striated Grasswren.

As per previous reports, head for the far north-east corner of the caravan park. Proceed along the track (quite okay to drive if your vehicle has clearance) that continues in that direction for about 1km, to a distinctive point where five tracks converge.

Take the right track that follows a fence line. This track is between two ridges. I found the grasswrens on the ridge slope to the left of this track, about half-way up the slope, and about 150m from the five-track junction.
I searched fruitlessly for the birds over three hours on my first afternoon here. I checked out various ridges and slopes but the one above looked by far the best habitat, so that is where my focus was the next morning. I found the birds soon after sunrise, in a gully on the ridge slope.
The grasswrens were responsive to a tape of Striated Grasswren. I had three birds hopping about me; in time they were joined by a party of Variegated Fairy-wrens.

Other good birds were about. I saw an Australian Little Eagle and at least two Spinifexbirds.

Plumed Pigeons were also about along with good numbers of Painted Finch.


Grey-headed Honeyeater was also quite common.

Posted by Greg Roberts at 22:56 No comments:

After leaving Cape Keraudren (see last post) we travelled south to the De Grey River, where we intended overnighting, but unseasonally heavy rain had turned the place into a quagmire.  A brief excursion turned up the distinctive buff-breasted Pilbara race of Blue-winged Kookaburra but not that of the Black-tailed Treecreeper.

We moved on to Karijina National Park - regarded as one of Australia’s finest reserves - in the Hamersley Range, for a three-night stay. We put up with a generator the first night as the only spot left was in a generator zone (this place is popular) but moved camp the next day to a generator-free area.  There are a series of camping areas, very nicely arranged and maintained.

The change in weather over just 24 hours as we moved south and inland was quite radical. The balmy winter days of the tropics are over. We have returned to decidedly cold nights.
After the rains, the desert woodland here, a mix of eucalypt and mulga with plenty of spinifex and tussock grass, is looking lush and vibrant - a stark contrast with the drought-stricken woodlands of western Queensland.
Dale Gorge, near the camping ground, is typical of the marvellous gorges and escarpments that have given this national park its reputation. They are awe-inspiring; the pictures tell the story. We walked both the rim and bottom of the gorge.

A small colony of Little Red Flying-Foxes was roosting in the gorge at the Fern Pool. Among them were a couple of Black Flying-Foxes.


With so many shrubs in flower, it was surprising there are not more nomadic desert honeyeaters about; just plenty of Singing, Spiny-cheeked and Brown Honeyeaters, and Yellow-throated Miners.

It was nice to find a group of Painted Finches on the Dale Gorge path. The red-bellied form of the Plumed Pigeon was also here.

A Ring-tailed Dragon Ctenophorus caudicinctus was found in the spinifex. 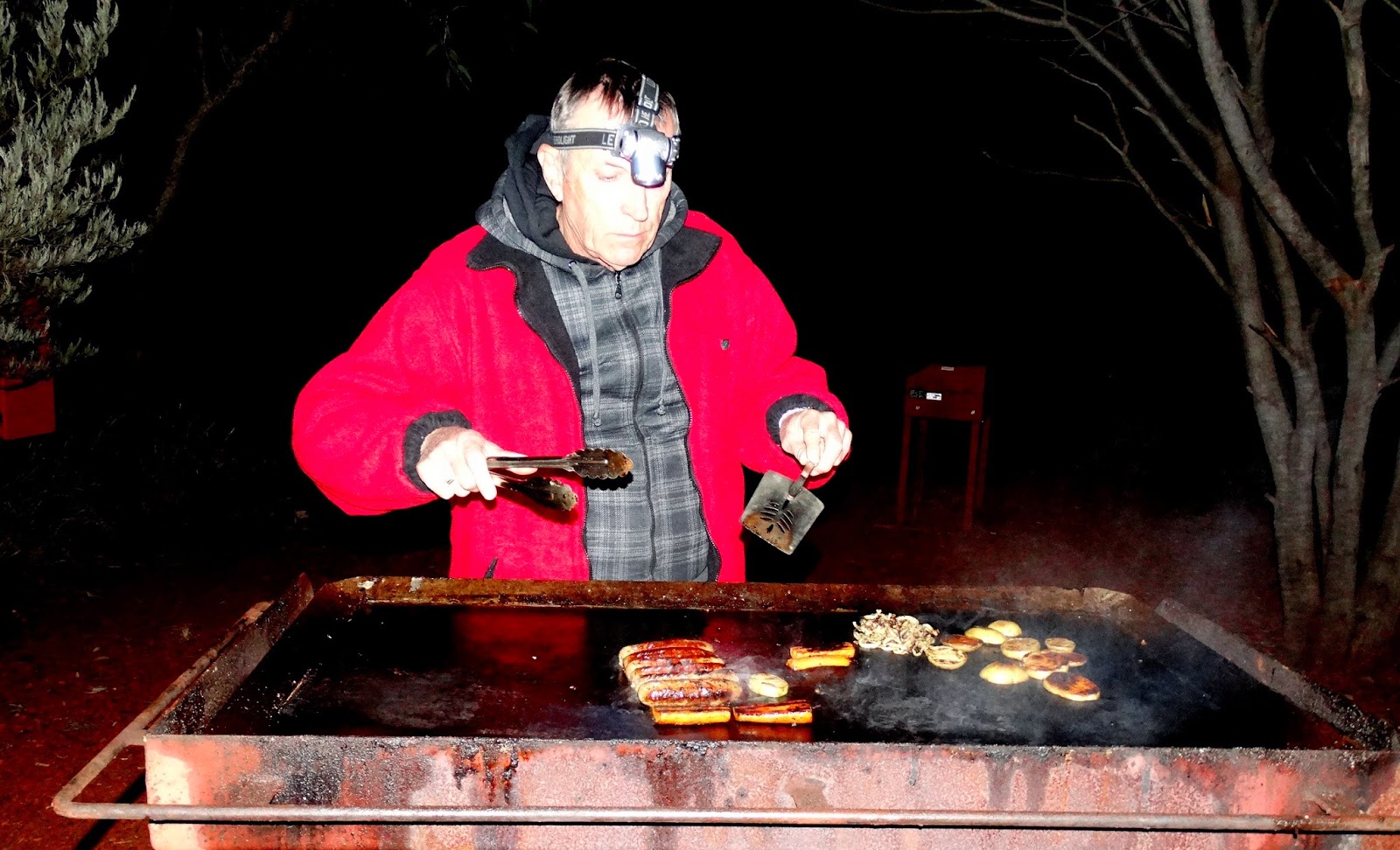 A bit of night-time dinner-making in the night bush.
Posted by Greg Roberts at 22:11 No comments:

After leaving  Broome (see last post) and the Kimberley, we headed south through the East Pilbara for a two-night stay at Cape Keraudren, a coastal reserve at the southern end of Eighty-Mile Beach where a beachside camping ground is run by the local council. Leaving this region we farewelled the small, red-bellied race of Grey-crowned Babbler, which was numerous in the north.

From our camper van, we had sweeping views north across reef flats to a sandy beach stretching to the distant horizon.

To the south was a rugged, jagged coastline of ancient coral and limestone. The overall effect was quite stunning. This is an extraordinary spot with great beauty.

In the mangroves, White-breasted Whistler and Mangrove Golden Whistler appeared to be quite numerous, along with Yellow White-eye and Mangrove Fantail. The mangrove birds were seen on occasion to leave the mangroves to forage in more open habitat.  Horsfield’s Bushlark was common in the grassland, where a Swamp Harrier was also seen.

On the coral cliffs was a mixed nesting colony of Lesser Crested Terns and Crested Terns, with both species appearing to have recently fledged young.


The two tern species were often at roost together. Plenty of waders were about, including resident Beach Stone-Curlew and Sooty and Pied Oystercatchers.


Other birds included both phases of Eastern Reef-Egret,and Striated Herons that appeared to be unusually orange in colour.

Long term residents of the camping ground and built nesting boxes for the Zebra Finches.

Extensive areas of mudflats were exposed at low tide. We watched a couple of Black-necked Storks try their luck at fishing.


There were a couple of macropods about that turned out to be a red-coloured subspecies of Euro.

Posted by Greg Roberts at 22:37 No comments: