Freckled Duck, Musk Duck, Budgerigar and nice close views of White-throated Nightjar were the highlights of a few days camping and birding near Gunalda, north of Gympie, and in the Wongi State Forest - Lake Lenthall area, north of Maryborough.

I kayaked around the shores of Lake Lenthall and found a flock of 15 Freckled Ducks in a backwater. The birds allowed me to approach quite close in the kayak.

There has been an influx of Freckled Ducks, considered Australia's rarest waterfowl species, from the inland to coastal areas in recent weeks.

A pair of Musk Duck was present on the lake. This is a rare species in south-east Queensland and this site must be close to the northern limit of its range. Both birds were shy: this is the female, the male would not let me get anywhere near it.

Also of interest on Lake Lenthall was a flock of 18 Cotton Pygmy-Goose.

Some other birds on the lake.

While on a backwater near Maryborough, 3 Pink-eared Ducks were seen.

We camped by a string of pleasant waterholes in open woodland in Wongi State Forest, not far from Lake Lenthall.


One of the commonest birds here was Fuscous Honeyeater, normally a localised and uncommon species in south-east Queensland. Other birds around included:


Before going to Wongi we stayed with our friends Abbie Grant-Taylor and Geoff Smith at their property near Gunalda, north of Gympie. We had a most co-operative White-throated Nightjar joining us at dusk. The nightjars were also calling at Wongi along with Australian Owlet-Nightjar and Bush Stone-Curlew.

A big surprise in the morning as we were relaxing over breakfast was a flock of about 20 Budgerigars which flew past us. These are the first of this species that I've seen in south-east Queensland, although small numbers have been reported recently from elsewhere in the region. Like quite a few other inland species, budgerigars are making their way coastward as conditions inland deteriorate following a couple of bumper breeding seasons. This image was taken a few months ago in western Queensland. 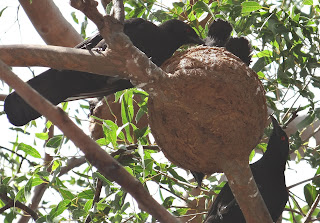 While at nearby Bauple, these White-winged Choughs were attending a nest.

Bird Feeders in the Garden

Should we feed native birds in our Australian gardens? I am often asked this question. It's a controversial issue but I reply in the affirmative, within reason. I see no harm and some good in the practice. It can supplement wild food sources in lean times and I think there is considerable merit in this kind of interaction between people and wild birds.
I have two types of bird feeder in my Sunshine Coast garden (above and below).

I put out relatively small quantities of mixed bird seed but generally no more than once a week - too much of a good thing is not good.

I don't leave meat out for the likes of currawongs, kookaburras and butcherbirds. These predatory birds are already doing very well in the suburbs and increasing their food supply helps boost populations further. The losers will be smaller birds; their nestlings and eggs are much sought after by predators.

The feeders I use have roofs, important for keeping moisture out of the seed. Seed is most often in demand in the cooler and drier months when natural food sources are more stressed. It is important for feeders not to be too close to thick vegetation, which could provide cover for cats. Birdbaths should be placed near feeders; I find that birds visiting seed feeders drink frequently from adjacent birdbaths.

Doves prefer feeding on the ground so I scatter a bit of seed below the feeders. I don't encourage the introduced Spotted Dove but there's not much I can do about them; they are solidly outnumbered by native Bar-shouldereds around here anyway.

Large bags of mixed bird seed can be purchased at supermarkets at reasonable prices. The seed will cater for all sizes and types of birds - for instance, Red-browed Finches feed on tiny seeds while Australian King-Parrots like corn; both seed types are in the mix.

I have as many as 12 White-headed Pigeons at the feeder at one time. This species is primarily a rainforest fruit-eater, but it is very partial to seed at certain times of the year.

There are plenty of types of feeder on the market (see here for instance); look around and pick whatever takes your fancy. Of course, the best way of attracting native birds to your garden is by planting as many native trees and shrubs as you can.

Birds aside, two mammal species regularly indulge themselves at the feeders - Short-eared Brushtail and Common Brushtail possums; see here for notes on how these two behave differently at the feeders. Sometimes the brushtails are a bit of a nuisance, hoovering out all the seed during the night and leaving nothing for the morning. I've tried various strategies to address this without success.

Freckled Duck, Hoary-headed Grebe and other Goodies in the Lockyer Valley

Six Freckled ducks were on Pechey's Lagoon. They were generally associating with Grey Teal and feeding in shallow water.
These birds, along with quite a few other waterbird species, have dispersed to coastal areas following good breeding seasons inland.

About 60 Great Crested Grebes were on Lake Atkinson and 30 on Lake Clarendon.

The Lockyer Valley was seething with ducks. I saw 20 Australasian Shovelers at Pechey's Lagoon. This is another species that is normally rare in south-east Queensland.

I saw about 130 Australasian Shovelers on Seven-Mile Lagoon, again a very large number for this species in the region.

I saw 2 Cotton Pygmy-Geese on Lake Atkinson and on the way home, 18 on a small dam on the Kilcoy-Woodford Road, at the Mary Smokes Road junction.

Black Kite was the commonest raptor about, although this species too is normally scarce in south-east Queensland. Other raptors seen included 2 Spotted Harriers and 1 Swamp Harrier.

A few Cockatiels were in the Lake Clarendon area.

Not far from Pechey's Lagoon, along Cross Road, I found a party of 8 Plum-headed Finches.

At lake Clarendon, a Grey-crowned Babbler found my Subaru Forester to its liking.

About 30 Red-rumped Parrots were feeding by the road near Lake Galletly.

Superb Fairy-wrens were around the Lake Galletly hide.

A Yellow-billed Spoonbill and Royal Spoonbill were together on Karasch's Lagoon.
Posted by Greg Roberts at 16:28 4 comments:

Good birds over the past couple of days around the Maroochy River on the Sunshine Coast include Australian Painted Snipe, between 160 and 200 Red-kneed Dotterel, Peregrine Falcon, Spotless Crake and unusually large numbers of Pacific Golden Plover and Latham's Snipe.

I saw a male and a female Australian Painted Snipe in an area of flooded grassland and exposed mud at the end of River Road, close to the Maroochy River in the locality of Yandina Creek. I was unable to photograph the birds; I snapped this male bird a few weeks ago in the Lockyer Valley.

Also present were between 15 and 20 Latham's Snipe, an unusally large concentration of this species and rather late in the season.

Red-kneed Dotterels were in extraordinarily large numbers. I estimated at least 160 and as many as 200.

Last December, I noted about 80 Red-kneed Dotterels at Ewen Maddock Dam, which I thought was a large number for a species normally scarce in south-east Queensland. Heavy rains have fallen since then and the dotterels have not been present at the dam and other sites they were seen. Clearly they are still about the region, however.

A fine adult Peregrine Falcon was watched hunting the Golden Plovers. A pair of Peregrines nest on nearby Mt Coolum. Other raptors seen this morning included Australian Hobby and Spotted Harrier. 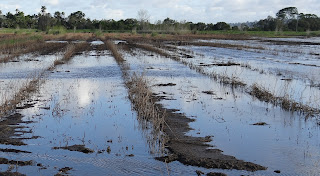 An overview of the site on River Road yesterday.

The same site today, following heavy rains overnight. The waders were still there but concentrated in flocks on isolated mud patches.

I noted recently how some of the grassland-wetlands habitat in this area had been destroyed for real estate development The grassland that was bulldozed was inhabited by several pairs of Lewin's Rail, a species listed as threatened under state legislation. I reported the development to the Queensland Department of Environment and Heritage Protection but was not even afforded the courtesy of a reply.

Since then, I have been contacted by the owners of some the best bird habitat in the area. They have tried to interest the Sunshine Coast Regional Council in purchasing 13 hectares of their land for a wildlife reserve.
Unfortunately the council has rejected the request because the land is not natural; it is human-modified. This  is true - the land is former sugar cane plantation. However, these former farmlands provide excellent habitat for a range of species which have been largely eliminated from the region by the destruction of wallum heath and wetlands for residential development.

That they are not natural should be no barrier to their protection - human-modified wetlands are the prime sites for birds and other wildlife in many parts of the world. Scarce or elusive birds that I have recorded regularly in the River Road area include Eastern Grass Owl, Lewin's Rail, Spotless Crake, Brolga, King Quail and Red-backed Buttonquail. Good numbers of raptors occur here including Spotted Harrier, Swamp Harrier, Peregrine Falcon and Australian Hobby. Other birds include Buff-banded Rail, Bush Stone-Curlew and Tawny Grassbird. These latest sightings add to the case for conserving some of this habitat.

The land-owners referred to above will sell their land privately if the council is not interested, so this is a unique opportunity. People wanting the land protected as a reserve could contact the Sunshine Coast Regional Council - mail@sunshinecoast.qld.gov.au - or the mayor, Mark Jamieson (phone 0754 418242 or email the address above, marked to the mayor's attention).

In other news, earlier this week we visited our friends Trevor and Annie Quested outside Bundaberg. A spot of birding near Childers in the early morning turned up a party of Apostlebirds and a group of Grey-crowned Babblers.