The normally elusive Pale-vented Bush-hen has showed very well indeed today and yesterday from the hide at Buckley's Hole, Bribie Island. I had a pair at very close quarters and a third in the distance across the wetland on the far shore.

Spotless Crake and Buff-banded Rail were also seen, while a pair of Lewin's Rail were calling.

Also at Buckley's Hole were a few other nice waterbirds.

At the Boongaree Caravan Park, where we stayed, a female Peregrine Falcon was about the place in the late afternoons, doubltessly attracted to large numbers of roosting Rainbow Lorikeets and Little Corellas. The falcon spent long periods perched very high up on a concrete tower.

This Whimbrel was at the Kakadu high tide roost on Bribie Island. The roost was made by developers after the destruction of a natural wader roost to make way for the Pacific Waters canal development. Unfortunately, the waders do not seem to have taken to it. The Kakadu roost, like the natural one it replaced, was intended for use by waders when their main roost across Pumicestone Passage was inundated during very high tides. Although I was at the Kakadu roost this week during a 2.3m high tide, there were few birds using it.


Lewin's Rail, Pale-vented Bush-hen, Baillon's Crake and Spotless Crake were among eight rail species seen at the Cooroy sewage treatment plant on the Sunshine Coast this morning, confirming this spot as the top waterbird site in the region. The other rails were Buff-banded Rail, Dusky Moorhen, Eastern Swamphen and Eurasian Coot.


I saw 4 Baillon's Crakes, with a couple at nicely close quarters for a change. Six Spotless Crakes were also seen and quite a few more heard.


I heard 2 Lewin's Rails and saw one bird briefly. I've not recorded this species at the sewage ponds previously. (The bird in this image was photographed not here but at Peregian Beach.) A Pale-vented Bush-hen was seen briefly in another pond today. It should be noted that public access to the ponds has now been closed until about July next year because of infrastructure works underway.


Some of the other regular waterbirds.


Near Eumundi on the way to Cooroy, I saw this Pallid Cuckoo, always a scarce species in coastal south-east Queensland.


This morning I found a Black-tailed Native-hen at the southern end of Ewen Maddock Dam on the Sunshine Coast. Following success at this site due to receding water levels during a recent visit (see post here) I returned today.

The native-hen was on an area of exposed mud among reeds. Following the directions in the post referred to above, I could see the bird from land through the scope, albeit somewhat distantly. Later I was able to approach the native-hen more closely in the kayak but it was shy. I am aware of a record of Black-tailed Native-hen from Redcliffe but this species is extremely rare in south-east Queensland.


I photographed the bird in the first image during a trip to western Queensland earlier this year. This unfortunately was as close as I got to the native-hen today. Still, the distinctive tail shape is evident. Later, I ran into local birder Russ Lamb, who also saw the native-hen.

Since my visit two weeks ago, a pair of Australian Painted-Snipe has been seen here, and a dead male painted-snipe was discovered. It is interesting that inland species such as Black-tailed Native-hen, Australian Painted-Snipe and Red-kneed Dotterel are turning up on the southern Queensland coast. There have been two bumper wet seasons in succession in the inland and there is still plenty of water out west, so why the birds are dispersing is something of a mystery.


Other birds today included about 20 Sharp-tailed Sandpipers and a single Red-necked Stint. Plenty of Red-kneed Dotterels are still on the dam and several Spotless Crakes were heard.


Along with the usual suspects.


Little Yabba Creek in the Sunshine Coast hinterland, in the foothills of the Conondale Range, has long been one of my favourite spots. Birds that showed during a three-day camping trip there this week included Marbled Frogmouth (see following post), Noisy Pitta, Wompoo Fruit-Dove, Rose-crowned Fruit-Dove, White-eared Monarch, Pale-yellow Robin, Russet-tailed Thrush, Paradise Riflebird and Logrunner.


I estimated between 12 and 15 Noisy Pittas were in dry rainforest within a 500-metre radius of the Charlie Moreland camping ground. I think this is one of the best birding sites in south-east Queensland; for instance, I saw a dozen or so Paradise Riflebirds this week without even looking for them. 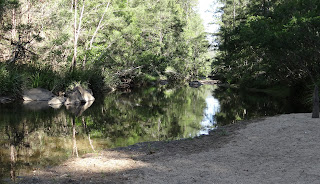 When I first came here in 1971 (as a radical student environmentalist!) the camping ground was a small clearing near this pool. Now, Charlie Moreland is the most popular camping ground in the Sunshine Coast hinterland, although quiet enough during the week if school holidays are avoided.

Some of the birds (and mammals) this week in the following images.

I've noted in an earlier article that numbers of Crimson Rosella and Satin Bowerbird in the Sunshine Coast region had fallen sharply since the 1970s, possibly due to subtle climage changes. A few of each were still about this week.

There were plenty of Red-necked Pademelons about and a few Red-legged Pademelons - a sound indication of the good weather conditions over the past couple of years.

I found White-eared Monarch at five sites around the camping-ground, and plenty of Spectacled and Black-faced Monarchs were seen as well.


It has been a good season for Marbled Frogmouths in the Sunshine Coast hinterland. I found these birds at a new site last night, not far from Charlie Moreland camping ground on Little Yabba Creek (see this link for  sightings of other birds around the camping ground) in the foothills of the Conondale Range. This is the male bird, which is greyer than the brownish female.


By coincidence, this Tawny Frogmouth was in my garden at Ninderry the evening before we headed off to Little Yabba for a three-day campout.


Some clear differences between the species can be seen in these images. Note the relatively longer, more tapered tail of the Marbled, which I regard as a key identification feature. Note also the blotching on the underparts of the Marbled as opposed to the fine streaking of the Tawny's underparts.


The white eye-brow of the Marbled is clearly wider than that of the Tawny while the eyes of Marbled are darker (though not the clear orange claimed in field guides) than the bright yellow eyes of Tawny.


This Marbled Frogmouth was at eye-level in the forest. They often sound as though they are much higher in the trees when they can be quite close to the ground.


This is a female Marbled Frogmouth I photographed on an earlier occasion.
Posted by Greg Roberts at 14:34 1 comment:


Baillon's Crake, Spotless Crake and Pale-vented Bush-hen were all seen well this morning at the Cooroy sewage treatment works on the Sunshine Coast.

A Pale-vented Bush-hen was flushed twice from reeds in one of the ponds. Other birds icluded 8 Latham's Snipe and 2 Little Grassbirds, along with several Tawny Grassbirds, and 50 White-throated Needletails.


This Spotted Harrier was present in a weedy field today near Yandina. Over the past three years, I've found these harriers to be consistently present in low-lying grasslands surrounding the Maroochy River. Birds have been in all plumage phases, indicating local breeding.
In recent weeks, harriers have been appearing in the Yandina-North Arm area in habitat I've not seen them in previously. This is likely to have something to do with the fact that the cane harvesting season in the Maroochy River flats has been underway, with large swathes of grassland as well as cane going under the harvesters. Presumably the birds have been forced to disperse.
Posted by Greg Roberts at 10:30 No comments: