Before meeting Chris, I found a pair of Cotton Pygmy-Geese on the lagoon at the junction of the D'Águilar Highway and Mary Smokes Road, and a second pair near the wall of Atkinsons Dam. After getting together, we walked around the western end of Seven Mile Lagoon. It was nice to see and hear several Brown Songlarks; we first had them at this site in the early-70s.
We counted 45 Red-necked Avocets, 12 Hoary-headed Grebes and 10 Australasian Shovelers, while an estimated 400 Glossy Ibis was an extraordinary number for this species in south-east Queensland. Several Yellow-billed Spoonbills were also about.

While Red-kneed Dotterels were plentiful elsewhere, none were seen at Seven Mile, where there were surprisingly few waders (avocets and stilts aside). This small flock of Sharpies were the only migratory waders.


About 30 Banded Lapwings were present in the paddocks near Seven Mile. We moved on to the small swamp opposite Lake Clarendon, where up to 7 Australian Painted-Snipe have been present. We found none and proceeded to Lake Galletly on the university campus near Gatton. The Australian (Spotted) Crake which has been here for some time showed well. A Little Grassbird was in vegetation close to the hide and a pair of Blue-billed Ducks was on the lake.


We spent the night in Gatton, arriving at Jahnke's Lagoon in the early morning. We saw some more Brown Songlarks near the lagoon and a Rufous Songlark across the road. A pair of Plum-headed Finches showed nicely near the spot where Tom and Marie Tarrant found them a few days ago, in long grass opposite the lagoon; I have had them at this site in years past. Plenty of Red-kneed Dotterels and Pink-eared Ducks were on the water. Quite a few Black Kites were also about, here and elsewhere in the region.


We stopped again at the Painted-Snipe spot near Lake Clarendon and this time flushed a single bird. About 10 Great Crested Grebes were on Lake Clarendon - far fewer than during some recent visits. On a small dam along Green Swamp Road, we found a third pair of Cotton Pygmy-Geese, while an Australian Hobby was nice. At Kelly Swamp, about 20 Wandering Whistling-Ducks were present.

We returned to the Seven Mile Lagoon area and found a male Australian Painted-Snipe showing nicely on a small dam along Haslingden Road.  On the canal on the eastern side of Atkinsons Dam we found a fourth pair of Cotton Pygmy-Geese. After birding woodlands in the Coominya area, we moved on to some fields near Toogoolawah. Here, some more Brown Songlarks were seen and heard, and a Stubble Quail was calling. On the way home, I stopped at Ewen Maddock Dam and saw a Spotless Crake. Here are a few bits and pieces that I photographed as we moved about: 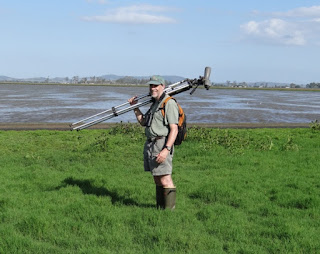 And an old mate, Chris Corben, at Seven Mile Lagoon

A Tale of Two Brushtails


The differences between the two species can be seen in the images above. Boebucks are darker and stockier. Their ears are shorter and more rounded.  Boebucks have a marked white line along the lip.
There is a mix of rainforest trees and eucalypts in the garden. Generally, Common Brushtails feed in the eucalypts, and Boebucks in the rainforest trees.


However, the two brushtail species have a common interest in the seed I put out in three feeders for native birds. Interestingly, the methods they employ to reach the seed are very different. A Common Brushtail positions itself on the tree trunk closest to a feeder and leaps across to it - a distance of less than 1 metre. Once in the feeder, the animal sits there quietly munching away until all the seed is disposed of. The evidence that a possum has raided the feeder is there in the morning in the distinctive lumps of masticated seed that they leave.


By contrast, a Boebuck moves along a branch above the feeder as close as it can get to the target. Then it wraps its prehensive tail around the branch and dangles upside down from the limb, as in the image above. With some difficulty, it swings its body until it grabs the edge of the feeder, thereby gaining access to the contents. Either way, the bird seed rarely survives an evening.


In other mammal news, Eastern Grey Kangaroos are a frequent presence in the garden in the wake of the prolonged dry spell we are having. This female and her joey have taken to drinking from the bird bath - something I've not seen them doing previously.


A Black-necked Stork and an Australian Painted Snipe have been found dead along the southern shore of Ewen Maddock Dam on the Sunshine Coast. It appears likely that the two birds were shot. I found the stork in the image above this morning.


The carcass was in about the same spot where I photographed this adult female Black-necked Stork on November 6 this year - about six weeks ago. The bird had been seen subsequently by other observers in this area. A couple of weeks after this sighting, Rick Franks reported to me that he found a dead Australian Painted-Snipe in the same vicinity.


There was no indication on the carcass of either dead bird that it had fallen victim to predators and the most likely explanation for the deaths is shooting. Black-necked Stork and Australian Painted Snipe are rare birds in south-east Queensland. My experience with the Queensland Department of Environment and Heritage Protection unfortunately is that its Wildlife Management Operations Unit does not bother even to acknowledge receipt of complaints made about the welfare of rare wildlife, let alone act on them.

Today I saw the Black-tailed Native-hen that I found on the lake's southern shore on November 20. It was in the same spot but again was extremely shy, offering no photographic opportunities. I flushed an Australian Little Bittern while kayaking along the fringe of a reedbed; another bittern was seen on November 6 in a different section of the lake.


I called in at the Nambour turf farm on my way home and was surprised to see 10 Black Kites (normally a rare bird in the region) resting on the turf.

A couple of images from the garden at home over the past couple of days:

SPECIAL BIRDS OF THE SUNSHINE COAST
AND HINTERLAND

An annotated list of bird species recorded on the Sunshine Coast and in the adjoining Cooloola sector of the Great Sandy World Heritage Area which could be regarded generally as either rare or difficult to see in southeast Queensland. Those marked * are considered to be hard to find generally in Australia.

*SPOTLESS CRAKE: Uncommon but regular in densely vegetated freshwater swamps. A skulker but easy to see in the right circumstances.

*LEWIN’S RAIL: Regular in coastal wallum heath, but the density of the vegetation makes them hard to see in this habitat. Uncommon in waterside thickets and densely vegetated swamps in the hinterland and on the coast. Usually detected by its distinctive call.

BLACK-NECKED STORK:  Uncommon but regular on wetlands and in river estuaries.

BEACH THICK-KNEE: Rare but resident on sandy shores and islands in the estuaries of the coast’s main rivers.

EASTERN REEF EGRET:  Uncommon but regular on rocky headlands. About equal numbers of white and grey birds, in contrast to further south in southeast Queensland and northeast NSW, where most are grey.

WHITE-WINGED TERN:  A common bird on the Sunshine Coast that is generally regarded as scarce elsewhere in southeast Queensland.

*MASKED OWL: Rare in wet sclerophyll and open forest in the Blackall and Conondale Ranges, where it is more often heard than seen.

*SOOTY OWL:  Uncommon in wet sclerophyll and rainforest in the Blackall and  Conondale Ranges. Can be responsive to playback at certain times of the year.

*EASTERN GRASS OWL: Seen frequently at several sites on dusk over the short cane fields and grasslands of coastal plains. Sometimes birds are detected hawking over fields before dusk. Scarce in wallum heath.

*POWERFUL OWL: Rare in remnant lowland rainforest in the Conondale Range and occasionally in coastal scrubs.

*MARBLED FROGMOUTH: Uncommon but regular at several sites in rainforest in the Blackall and Conondale Ranges. Can be responsive to playback.

*BLACK-BREASTED BUTTON-QUAIL: Around the Sunshine Coast, rare but regular at favoured sites in dry rainforest and lantana in the hinterland, and occasionally in dune vegetation along the coastal strip. Seen more easily at Inskip Point.

PAINTED BUTTON-QUAIL: Uncommon in open forest and sometimes the fringes of vine scrub.

SUPERB FRUIT-DOVE: Uncommon but a few are found in summer in rainforest in the Blackall and Conondale Range foothills.

*NOISY PITTA: Regular in rainforest in the Blackall and Conondale Ranges, and in coastal vine scrub in winter.

BARRED CUCKOO-SHRIKE:
Regular in summer in remnant lowland rainforest in the hinterland and on the coast.

SHINING FLYCATCHER:  Uncommon but regular in mangroves, especially on the water line at high tide, when the habitat can be difficult to access on foot. Appears to be present all year.

*EASTERN BRISTLEBIRD:  Rare at high altitudes in open forest and rainforest edges in the Conondale Range. The species may be extinct in this area.

*WHITE-EARED MONARCH:  Fairy common and readily seen at several lowland rainforest sites, on the coast and especially in the hinterland.

FAIRY GERYGONE: Regularly found in coastal vine thickets, and further inland in remnant lowland rainforest in northern parts of the Sunshine Coast. Appears to be increasing in numbers.

BLACK-CHINNED HONEYEATR: Rare visitor to woodlands in the hinterland, mainly in winter.

PARADISE RIFLEBIRD: Uncommon but regular in rainforest and wet sclerophyll forest in the Blackall and Conondale Ranges.


BIRDS OF THE SUNSHINE COAST
Birds seen by me within the boundaries of the Sunshine Coast and Noosa councils. The area covered also extends north to the Cooloola sector of the Great Sandy World Heritage Area; south to Toorbul and Bribie Island; and west to the western slopes of the Conondale Range (see map). The list includes seabirds seen offshore from the coast as far as 35 nautical miles. It is regularly updated. [] = introduced. 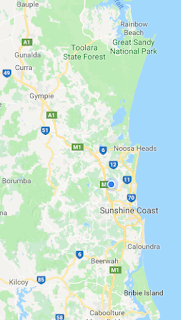