Yandina Creek Wetlands Have Been Drained 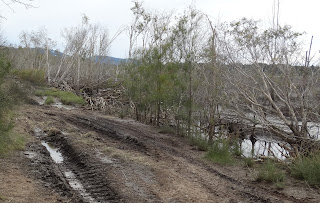 The nationally significant Yandina Creek Wetlands - habitat for rare and endangered wildlife and large numbers of threatened migratory shorebirds - have been drained in recent days. Many waterbirds were nesting at the time. Although alerted to the drainage plans, the federal Government, the Queensland Government and the Sunshine Coast Council have collectively done nothing to try to protect the area.

Many hundreds of waterbirds that were present on the wetlands just a few days ago are gone. The entire wetland area of 200 hectares has been drained. Yet if action is taken soon, the drainage works can be reversed. Below is a series of before and after snaps to demonstrate what has transpired.

(A1) Here is a recent image of the wetlands with the backdrop to the west of Mt Ninderry.

(A2) This is what that area of deep freshwater lakes looks like now.

(B1) This image shows how the wetlands appeared looking east, towards Mt Coolum. 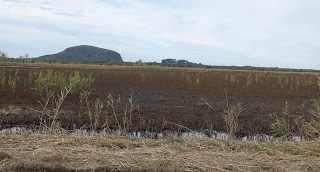 (B2) This is what that area looks like now. 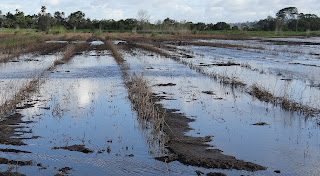 (C1) This area was favoured by the endangered Australian Painted-Snipe and large numbers of migratory Latham's Snipe. 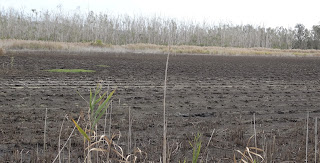 (C2) This is what that habitat looks like now. 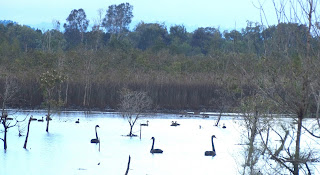 (D1) This area was frequented by hundreds of ducks and other waterfowl. 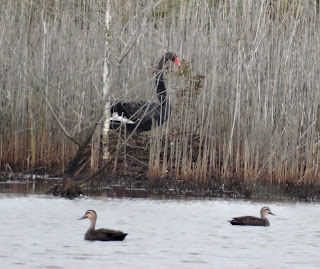 (D2) About 20 pairs of Black Swan were sitting on nests last week, including this bird. Pacific Black Ducks, Purple Swamphens and Pied Stilts were also attending nests in this part of the wetlands. 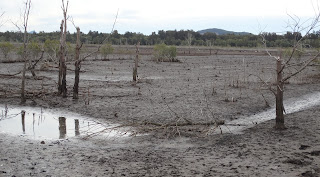 (D3) This is what that spot looks like now. 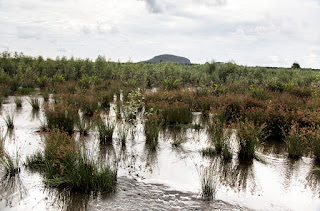 (E1) This area of sedges and rushes was the habitat of skulking birds such as Lewin's Rail and Spotless Crake. 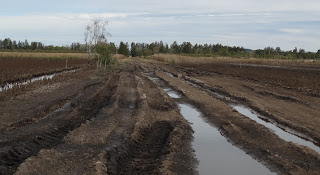 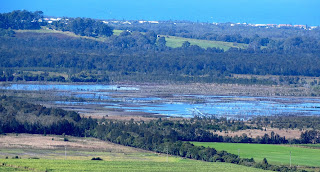 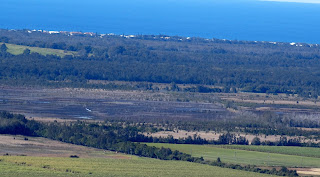 (F2) The same area after drainage.

How did it come to this? The 200-hectare Yandina Creek Wetlands ticked all the boxes. This wetland was without equal in terms of biodiversity in the Sunshine Coast region. It was one of the finest wetlands of its kind in the whole of Queensland, embracing a wide range of habitats including mangroves, sedges, grasslands, mudflats and deepwater pools. It harboured rare and threatened species including the endangered Australian Painted-Snipe, and provided habitat for hundreds of migratory shorebirds protected under international treaties. The wetlands had enormous value for flood mitigation in a highly flood-prone area. They had great potential as an ecotourism destination.

Yet the federal Government, the Queensland Government and the Sunshine Coast Council did nothing to stop the drainage works, ignoring representations from numerous individuals and organisations over the past six months.

Their reasoning?  Firstly, the powers-that-be concluded that drainage works are part and parcel of an existing land use. The wetlands are comprised of properties where sugarcane was grown before they were sold 10 years ago. The new landholders, who include wealthy Sunshine Coast property developers, failed to maintain floodgates that controlled tidal water flows from the Maroochy River to drainage canals on the properties. That meant the land could be inundated twice daily by tidal water through broken floodgates (see here for more), thereby creating the wetlands. 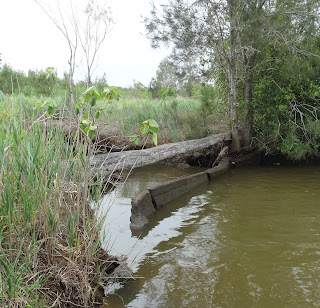 The wetlands were able to be drained now because the landholders - aware of mounting public pressure on governments to do something - repaired the floodgates, thereby legally continuing - in the eyes of government - an existing land use.

Secondly, governments decided at all three levels that the wetlands are unimportant because they had been "modified" by humans. In a sense, according to public officials incapable of thinking outside the box, the wetlands are of no significance because they were created artificially. This blinkered view ignores three fundamental points.

Firstly, artificial or not, the wetlands attracted an extraordinary variety and abundance of wildlife, much of it protected under state and Commonwealth law. Secondly, the Yandina Creek Wetlands resemble habitat that was widespread in the Maroochy River flatlands before the development of sugar cane plantations many decades ago; what has occurred essentially is that natural habitat was restored. Thirdly, governments around the world are spending large sums of money creating wetlands because there is so little of the habitat remaining in its "natural" state.

None of that rings any bells  for our governments. Where to now? The Sunshine Coast Council and the federal and Queensland governments can be lobbied to reverse the drainage works by insisting that the floodgates be opened or removed. One or other governments can come up with the funds necessary to acquire the wetlands for a conservation reserve. The Queensland Environment Minister, Steven Miles, plans to visit the site soon. However, landholders have refused the minister access to the properties. News of his pending visit is believed to have triggered the move to drain the wetlands.


At the request of Peter Wellington, the local MP and parliamentary Speaker, Mr Miles has taken an interest in the wetlands, even though his department is on the record as dismissing the area as unimportant because it is "modified". Mr Miles can be asked to provide funding to the Sunshine Coast Council to help acquire the wetlands, and to ensure that state laws protecting important wetlands and threatened wildlife are complied with:

A petition has been launched calling on the federal Environment Minister, Greg Hunt, to provide funding to the Sunshine Coast Council to enable it to acquire the properties:  see here for the link .  Mr Hunt can be written to and asked to provide funding and to ensure that Commonwealth laws are complied with, whether or not the habitat of endangered, protected wildlife has been "modified":


The Sunshine Coast Council has rejected pleas to acquire the wetlands for a reserve. The council has not undertaken any scientific assessment to determine the environmental value of the area. The mayor can be written to and asked to do all in the council's power to protect the wetlands:


BirdLife Australia has produced an online letter that can also be forwarded to the mayor: see here for access to the letter.

A Facebook page has been created for the wetlands -
see here.

Also, a Twitter hashtag for the wetlands: see here.

A full report on the case for saving the wetlands can be found here.