Large-tailed Nightjar and loads of waders were the highlight of a three-night camp at Boonooroo, south-east of Maryborough on the Great Sandy Strait. We visited Boonooroo after spending time at Burrum Heads and Bundaberg.

The jacana in the image above had two tiny nestlings on a freshwater pond near the township. One of the youngsters can just be seen in the bottom right-hand corner of the picture above.


I first heard the distinctive call of a Large-tailed Nightjar from near the banks of Little Tuan Creek in the early morning from the Boonooroo Caravan Park. At 4am the next morning I went to that area and had no trouble enjoying excellent, repeated views of a pair of nightjars in the coastal scrub. The birds were very flighty and I was unable to photograph them; thanks to Geoff Jones from Barra Imaging for this one. Boonooroo is close to the southern-most limit of the distributional range of this species. 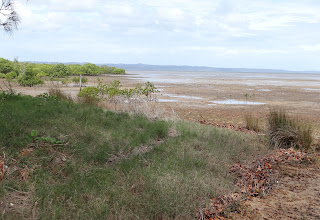 The waders could be found in various places at high tide behind the mangroves on salt pans a little to the north of the township.


A Buff-banded Rail was in the mangroves of Little Tuan Creek.

During a morning kayak along Little Tuan Creek, a single Shining Flycatcher - a juvenile female - was seen.