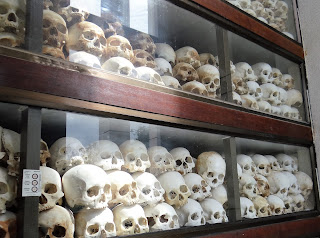 We visited the so-called Killing Fields on the outskirts of the Cambodian capital of Phnom Penh - the Choeung Ek Genocidal Centre. This was a moving and troubling experience. 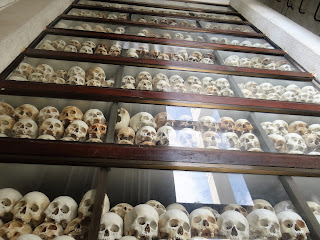 Here we looked at the rows upon rows of human skulls stacked high in the Memorial Stupa in the grounds where an estimated 30,000 Cambodians were butchered by Pol Pot's murderous Khmer Rouge regime. The barbarity of that regime was writ large on those skulls: lines and cracks from machete cuts, holes from hammer blows, caved in skulls. The Khmer Rouge did not waste bullets on its victims. 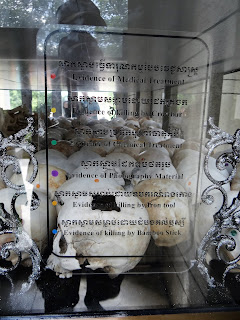 Victims included supporters of the deposed Lon Nol regime, academics, teachers, people who had the misfortune to wear glasses, actors, artists, Vietnamese, Chinese, or anyone suspected of not being totally loyal to the Khmer Rouge. Pol Pot had a saying: Better to kill an innocent in error than to let an enemy escape in error. More than 1 million Cambodians were either murdered or died of starvation after being forced from the cities to grow rice in the countryside.

One old man we met in northern Cambodia told us that in his village, there was just enough food to feed the influx of city dwellers, but in many neighbouring areas, food was in short supply and many died.
Victims were trucked daily to the killing fields of Phnom Penh, just one of many slaughtering grounds around the country. Victims were tortured in order to extract confessions of disloyalty before being slain. As many as 300 a day were killed at the Choeung Ek site, their bodies dumped in shallow graves and doused with pesticide to mask the stench of decaying flesh. While executions were underway, so-called patriotic songs were played through loudspeakers to drown out the screams of the dying.

In one of the many mass graves at the site, we found two human teeth on the surface that had been unearthed by recent rain. Bone and cloth fragments from victims are continually being found.

We met an old soldier begging from outside the barbed wire enclosure fence. His right leg had been blown off by a landmine.

We saw the so-called Killing Tree, where babies and toddlers were held by the feet as their heads were smashed against the tree trunk.  We saw graves for different victims. One for Chinese. One for naked women  and babies. One for headless corpses. We saw piles of victims' teeth and bone fragments and clothing, much of it clearly worn by young children. 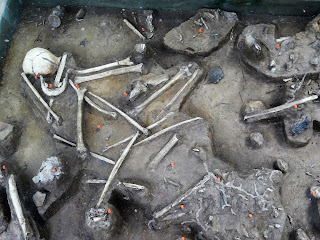 Throughout all of this, almost unbelievably, Australia was among most of the world's countries that continued to recognise the authority of the Pol Pot regime in the face of overwhelming evidence of genocide. The world stood back and did nothing until the butcher was finally deposed by the Vietnamese invasion of 1979.

On a brighter note, some scenes from out and about in Phnom Penh.