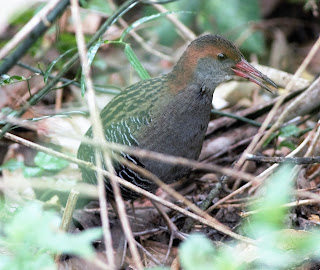 First light this morning saw me at one of my favourite birding spots: Little Yabba Creek around Charlie Moreland Park in the Sunshine Coast hinterland's Conondale Range. Top bird was Black-breasted Buttonquail: I found a pair then a single female in vine scrub within the first 200m of the walking trail at the western end of the camping ground.

Above was the best image I could manage in lousy light conditions this morning. Below is a bird photographed recently in the nearby Imbil State Forest.

I first saw Black-breasted Buttonquail at Little Yabba Creek in 1972, in scrub on the eastern side of the causeway. Since then I've seen them occasionally at different spots in the area, including close to today's site, but they are always uncommon here and never regular, unlike the more reliable Inskip Point and nearby Imbil State Forest.

Several Regent Bowerbirds and a pair of Crested Shrike-tits were among other nice birds on offer.

Logrunners were out and about.


As were all 3 species of South-East Queensland monarchs. A full list of species seen at Little Yabba Creek can be found here.


I moved on to Gap Connection Road at Moy Pocket where I had a most co-operative pair of Lewin's Rail in a spot where I've had this species several times previously side-by-side with Pale-vented Bush-hen, which wasn't present today.