After failing on Saturday to find the Regent Honeyeater that turned up late last week at Stanmore, near Woodford in south-east Queensland (see next post), I returned to the site yesterday (Tuesday October 29). The Regent Honeyeater was the first bird I saw when I arrived at 660 Cove Road at 5.40am. The bird was in a flowering shrub to the left of the driveway, where it has been seen several times in recent days.

I had the honeyeater in view for just a few seconds before it disappeared, so no photographic opportunities. Ken Cross snapped the bird in the first image in the same flowering shrub on Sunday. I waited by the shrub until 9.15am and saw it once more, very briefly in flight. In that time, the flowers were visited by Little Friarbird, Blue-faced Honeyeater, Brown Honeyeater, Noisy Miner and Scaly-breasted Lorikeet. The Regent is by all accounts highly nervous and flighty. When Roger Jaensch found the bird last week, he reported that it associated closely with a Little Friarbird. That was also the case when I saw it yesterday.
This is only the third time I have seen this endangered species: the other sightings were on the Cumberland Plain west of Sydney and near Storm King Dam, Queensland.

I moved on to Nathan Road Wetlands at Kippa-Ring but could not find the Pectoral and Wood Sandpipers that were found here last week by Gavin Goodyear. (They could have easily been there - conditions were  dreadful, very hot with strong, gusty winds.) A few Curlew-Sandpipers and Red-necked Stints were scattered among the many Sharp-tailed Sandpipers.

Several Latham's Snipe were about. Also seen was a single Black-tailed Native-hen that has been there for a few days. Interestingly, the first native-hen to be recorded in south-east Queensland was at this site (seen by Keith Taylor in the early-1970s).
About 20 Marsh Sandpipers were on the wetland - a large number for this species in south-east Queensland  - along with good numbers of Red-necked Avocet.

I called in to Buckley's Hole on Bribie Island but there was no sign of the Australasian and Australian Little Bitterns seen there recently during the 2 hours I was in the hide. A single Spotless Crake, 4 Glossy Ibis and confiding Comb-crested Jacanas were among the birds present..

Closer to home, the resident Boebuck in our Ninderry garden on the Sunshine Coast has a baby.

A Common Brushtail and its young have been sleeping in the shed, so we have two possum species presently with young in toe, both continually raiding the seed in the bird feeders.

Over the weekend I visited an area of wallum heath near Noosa with Jon and Alison Elliott. We saw Eastern Ground Parrot, King Quail and Painted Buttonquail. I've not previously seen the buttonquail in this habitat; it was presumably feeding on grass seeds in recently burned heath.
Posted by Greg Roberts at 03:07 3 comments: 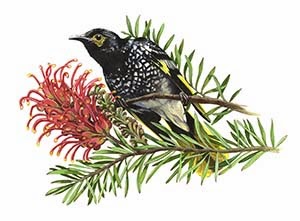 And so it transpired that this morning, a small army of twitchers descended on the site, searching thoroughly but unsuccessfully for the elusive honeyeater until giving up around lunch-time. Later in the afternoon, however, the bird was seen by other observers.


Fortunately some other nice birds were about. Rufous Songlark and White-winged Triller, both fairly scarce summer migrants in south-east Queensland, were present in some numbers along Cove Road and were singing well.

A female Common Koel was unusually co-operative for this species.

A male Black-necked Stork was on another dam along Little Cove Road.

Five Black-tailed Native-hens were seen at the wetland adjacent to the meatworks at nearby Kilcoy.

A pair of White-throated Nightjars performed nicely at dusk near Wappa Dam. Close to home at Ninderry, this Australian Owlet-Nightjar showed well after others of its species remained frustratingly elusive earlier in the evening.

In the home garden at Ninderry, meanwhile, Channel-billed Cuckoo this season has been exceptionally vocal and unusually visible.

A day out birding earlier in the week began well at Little Yabba Creek with Dusky Honeyeater, White-eared Monarch, Crested Shrike-tit, large numbers of Wompoo Fruit-Dove and Barred Cuckoo-shrike. We moved on to Moy Pocket, seeing Painted Buttonquail and Fairy Gerygone. A Black-necked Stork was present at Lake Macdonald, where the Freckled Duck was perched in its usual spot. A Lewin's Rail showed very nicely near Eumundi and a Spotted Harrier at North Arm. This female Grey Goshawk was sitting on a nest near Cooroy, where a day earlier I saw a pair of King Quail.

This magnificent Masked Owl was flushed during the day by birders who prefer to remain anonymous along Elimbah Creek near Donnybrook on September 2 this year.

An adult Masked Booby was found by Bec Tardent on Sunrise Beach, Sunshine Coast, on September 30 this year. Bec reports that the bird was not bothered by a steady procession of beachgoers.

Posted by Greg Roberts at 14:49 No comments:

After visiting Border Ranges National Park (following post) we visited the coastal national parks of Yuragygir and Bundjalung. We spent three nights at the seaside camping ground/caravan park at Brooms Head and two nights at the Woody Point camping ground near Iluka.

I found several pairs and parties of Southern Emu-wren in low heath in Yuraygir National Park along a sand track heading north just before Brooms Head township. The emu-wrens were often in the company of Red-backed Fairy-wrens.

In the same area of heath I saw several Tawny-crowned Honeyeaters. This species is close to the northern limit of its distributional range here. Among the Tawny-crowneds was a newly fledged youngster. White-cheeked Honeyeater was also common in the heath.
Quite a few bronzewings were about but they turned out to be Common, not Brush as might be expected in this habitat.I had a flock of 100+ White-throated Needletails feeding over the heath and among them were a few Fork-tailed Swifts. 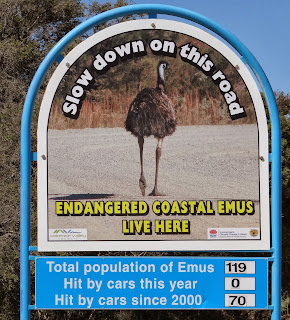 Yuraygir is one of the few places in coastal NSW where emus are to be still found. We saw a distant party not in the national park but in cane fields between Maclean and Brooms Head.

At both Brooms Head and Woody Head and all along the coast, large numbers of Short-tailed Shearwaters were battling strong winds offshore, with numerous birds on the water and beach, dead or dying. At one point they were literally falling out of the sky, with birds on roads and footpaths, in gardens and parks - all over the place.
Similar spectacles were evidently unfolding elsewhere along the NSW coast in what clearly is a very large wreck of young shearwaters returning to their south-east Australian breeding grounds for the first time. Among the numerous Short-taileds offshore were small numbers of Wedge-tailed Shearwaters. A single Streaked Shearwater was also seen off Woody Head.

Waders around the rocky headlands at Brooms Head included a pair of Sooty Oystercatchers  and good numbers of Ruddy Turnstone. Eastern Reef-Egret was also present.

On mudflats at Sandon, a short drive from Brooms head, several Grey-tailed Tattlers were present, along with Common Greenshanks and a few other waders.

A few scenic shots. The image above is looking inland over Lake Arragan from dunes north of Brooms Head.
Red Cliff in the same area was impressive.

We visited the delightful pub at Iluka, where this image was taken of the Clarence River.

The coastline in Bundjalung National Park was equally impressive - this is the beach south of Woody Head.

A fish-cleaning bench at Brooms Head.

This honeyeater is well-named.
Plenty of Ospreys about.

Offshore, quite a few Humpback Whales were seen splashing about in the rough seas.

We visited the remnant rainforest at Iluka Nature Reserve, where I had no trouble getting on to White-eared Monarch, here at the southern end of its distributional range. Rose-crowned Fruit-Dove and Regent Bowerbird were plentiful here.