Bali Starling in the Bag 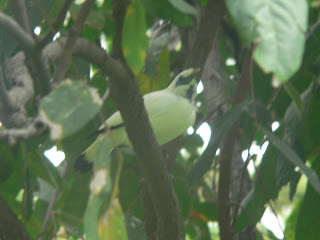 Bali Starling has long been on my want-to-do list and it finally was ticked off that list today. 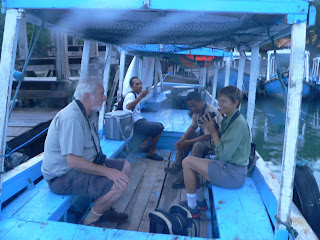 After a long drive from Denpasar, Bali, last night, I headed off this morning from the West Bali town of Labuhan Lalang with birding friends Bill Watson and Barbara De Witt, and our guide Hery, a park ranger at Bali Barat National Park. It was a 30-minute boat ride to a sandy bay in the national park.
Hery explained that there are only about 15 free-flying Bali Starlings left in their natural environment in the national park. A captive breeding program has worked well - about 100 birds are nesting in captivity and several pairs are released annually into the park. Poaching for bird collections was the initial problem, but following a successful crackdown on poaching, the worry now is predation by the likes of monitors and palm civets, numbers of which may have risen to unnaturally high levels. Two weeks ago, the last of the truly "wild" Bali Starlings in the national park was killed and eaten by a civet. 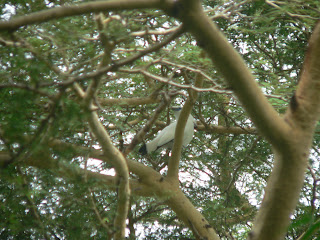 It took us about an hour to find our first Bali Starling, the bird above. It was unbanded, so it was either raised in the wild by captive-bred parents, or it was a genuinely "wild" bird that had escaped the notice of park authorities. Either way, it was impressive. 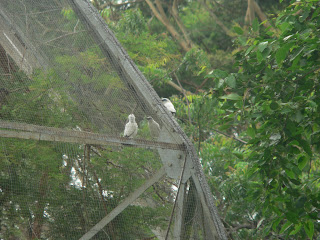 We saw a second bird briefly, then found a third, this one with rings on its legs, clinging to the wire of a large cage which park authorities have established to facilitate the reintroduction of captive-bred birds to the wild. Two pairs of starlings were in the cage during our visit, undergoing a kind of adjustment phase before being released into the park. 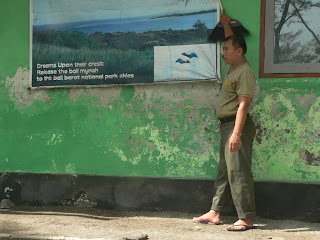 One of the rangers holds up a sign outside the park headquarters. They are a dedicated bunch battling against the odds. Let's hope their efforts succeed in saving this beautiful bird.