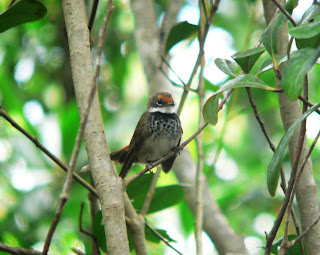 The day started with a morning paddle up Coolum Creek in the kayak. This beautiful stretch of waterway is close to the high rises of Coolum, chaotic with holiday-makers at this time of the year, yet I had the place to myself, other than plentiful birdlife including this Rufous Fantail in the mangroves. 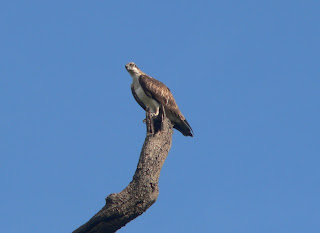 An Osprey was patrolling the backwaters of Coolum Creek. 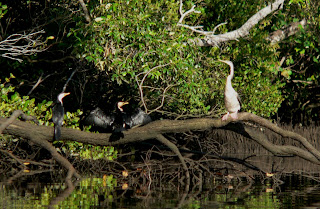 Little Pied Cormorants sunning themselves with an Australasian Darter 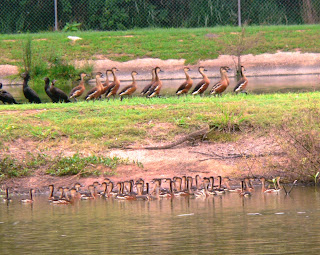 At the Coolum sewage treatment works, these Wandering Whistling-Ducks and Little Black Cormorants were unperturbed by a large Lace Monitor in their midst 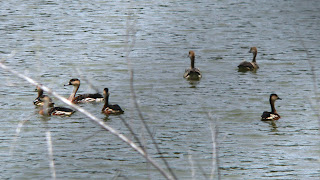 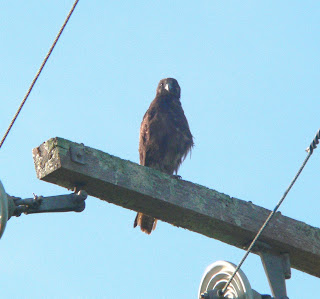 In the grasslands along nearby River Road were several Brown Falcons. 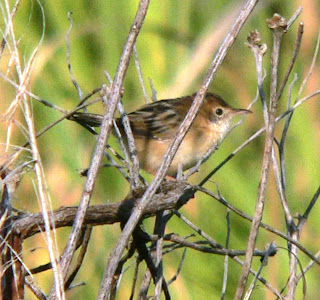 And this neat female  Golden-headed Cisticola.
Posted by Greg Roberts at 08:24 No comments:

A Morning in the Kayak on Coochin Creek, Sunshine Coast 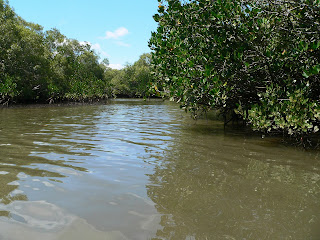 A morning exploring the myriad of waterways in the mangroves of Coochin Creek, Sunshine Coast. I was in this general area - mostly in the Pumicestone Passage - last week and returned because of some interesting things going on here with flycatchers. 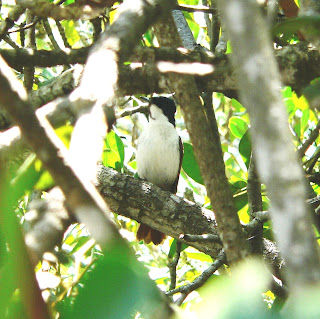 I found two new pairs of Shining Flycatchers (including this female), bringing to 12 the number of territories I have found for this species in the Coochin Creek-Pumiceston Passage area during the two visits. Hard to believe that this bird was regarded as extremely rare in southeast Queensland until recently.
I returned to the area because suspicions remain about whether Broad-billed Flycatcher, another predominantly tropical mangrove flycatcher, may be about. I posted photographs last week of a bird I thought to be that species but which was evidently a female Leaden on the basis of the absence of graduation in the tail. However, I realised subsequently that I failed to photograph two other flycatchers which were behaving as a pair; one of these was much more brightly coloured than the other, showing glossy blue upperparts. I  looked hard for them today but failed to see any Leaden Flycatcher-types. I mention this because it may be worthwhile for birders to keep an eye out for Broad-billed Flycatcher in southeast Queensland. 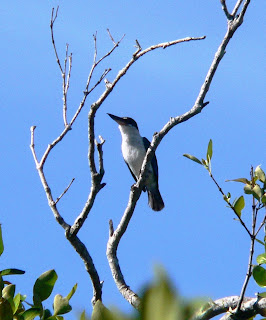 There were plenty of Collared Kingfishers about today - always a joy. 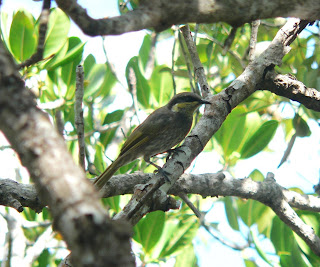 Mangrove Honeyeaters were abundant. It is interesting that this species appears to be absent from some parts of the Sunshine Coast - such as along the Noosa River, while it is scarce along the Maroochy River. 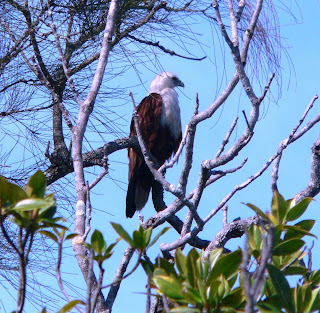 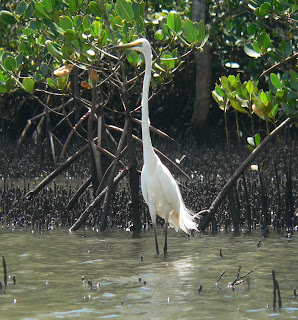 As did this Great Egret in breeding plumage. 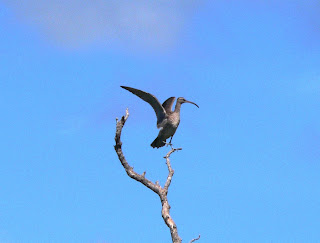 There were plenty of Whimbrels roosting in the mangroves.

Posted by Greg Roberts at 14:01 No comments: 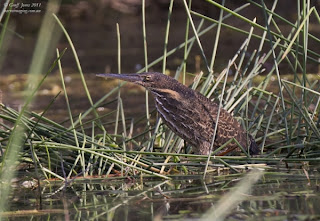 I had a Black Bittern in mangroves today in the northern Pumicestone Passage, on the Sunshine Coast. It was too quick to photograph - this one is from Barra Imaging. 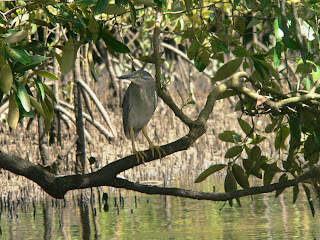 The bird was in the same habitat as 10 Striated Herons that I saw today - including this one. 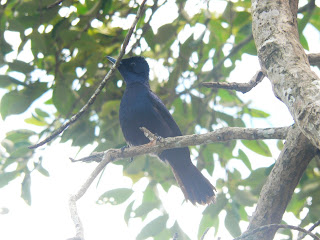 This was one of the Shining Flycatchers I had at 10 sites where I saw or heard the species in the passage today, bringing to 20 the number of sites on the Sunshine Coast that I have for the species. 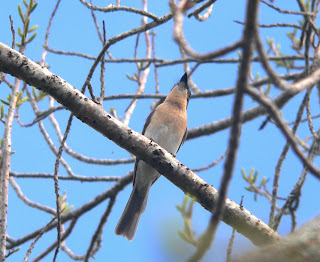 I was fooled by this Leaden Flycatcher in the mangroves, thinking it was a Broad-billed initially. 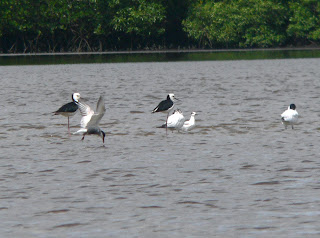 Nice to see some terns including with these Gull-billed Terns, a Whiskered Tern (in flight) and a White-winged Tern (third from left). 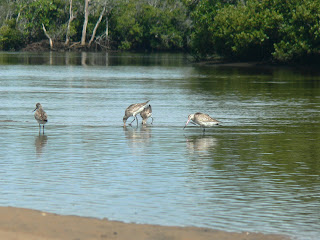 And waders, including these Bar-tailed Godwits
Posted by Greg Roberts at 16:51 2 comments:

Superb Fruit-Dove and Fruit Pigeons of the Sunshine Coast 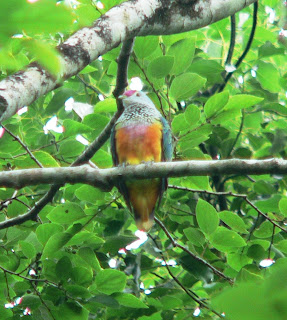 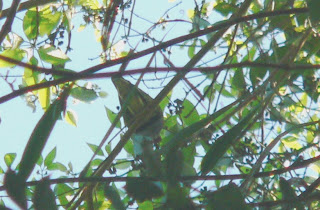 This male Superb Fruit-Dove was distant but we (myself, Chris Corben, Gerry Richards and Lucy Richards) were able to get onto it finally. As usual, it was calling high up in the rainforest canopy and difficult to find. 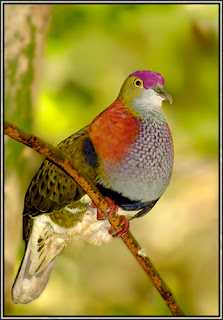 Here is a nice image of the species, by Chris Todd. 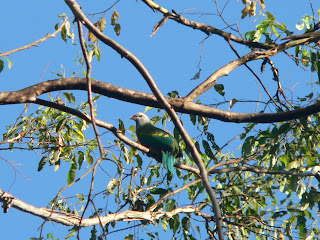 There were plenty of Wompoo Fruit-Doves about. All three fruit-doves could be heard calling simultaneously. 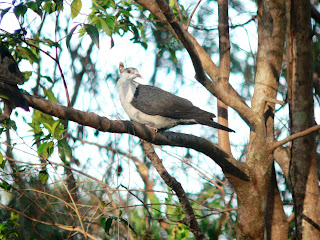 White-headed Pigeon is another rainforest pigeon that is about in good numbers around the Sunshine Coast. 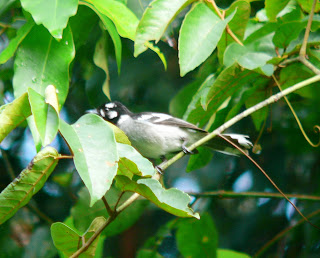 This White-eared Monarch was seen today in the Yandina scrub.
Posted by Greg Roberts at 10:34 2 comments: